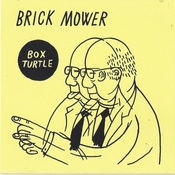 This record is one of the coolest things I have gotten in a while. It is a clear, lathe cut, flexi-disc and there were only 50 made. So who would give us something so cool that you would trade in your first born? Stumparumper Records, that’s who. Brick Mower has had albums and singles out on Stumparumper Records and also Viking On Campus Records. This 7″ has 2 songs on it, beginning with “Box Turtle”, from their “Floors” album that is still available. On the flip side is “Exit Flagger” that was previously unreleased. The songs have a very pure and raw sound to them. The packaging and the coolness of the lathe cut record really upped the ante for their next release which I hope will be coming soon.